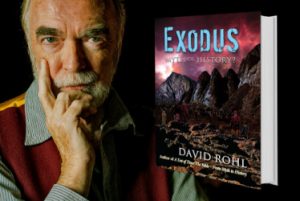 Great and easy-to-understand
Introductory Video overview on the topic below.

Our introductory video below reviews the basic concepts in David Rohl's New Egyptian Chronology which dates the Exodus to 1446 BC, uses 215 years in Egypt for the Hebrews (instead of 430), and also uses an alternative dynasty dating method. For the skeptics, please keep an open mind and breath as you continue reading.  The goal is clarity in what Scripture reveals, is it not?

Why is it important to accurately date the Exodus? Mainstream academia inaccurately dates the Exodus to 1250 BC/BCE (Ramses II) while also hypocritically claiming there is no evidence for Moses and the Exodus. Oddly enough many refuse to change on the date of 1250 BC. With the correct dating, could everything in the Bible line up to Egyptian and Middle Eastern history? Yes!  David Rohl, an Egyptian Chronologist, introduces a new theory called the "New Egyptian Chronology."

Getting the Exodus date correct is vitally important to properly understanding the archaeological findings in the Middle East.  Where once traditional academia looked at the archaeological evidence and never matched it to Biblical accounts, now the history of the Bible, Israel, including the origins of the Hebrew Language - everything lights up and is starting making sense.

Traditional academic dating of an 1250 BC Exodus only had the effect of making atheists and agnostics.  It only proved to many the Biblical accounts were inaccurate. In a recent attempt at revising the Exodus dating, a theory called "the Early Date Exodus" chose

the date of 1446 BC, but had some problems in matching Egyptian history.  Now David Rohl challenges the established Egyptian Chronology's dating of the dynasties, taking it from a sequential sequencing of pharaohs, to the idea that multiple pharaohs sometimes ruled at the same time but in different regions of Egypt. This is an over-simplification of Rohl's theory, but needless to say, his theory re-sets Egyptian Chronology in a way that more accurately matches Biblical accounts.